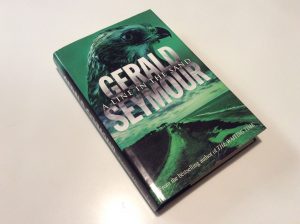 It’s hard to believe but it’s now twenty years since A Line in the Sand was published in hardback. I remember it coming out in January and a check of Amazon UK confirms it was published on 2 January 1999.

It was Gerald Seymour’s eighteenth novel so it’s sits halfway between Harry’s Game and the latest book Battle Sight Zero.

A Line In the Sand was the story of a man who had given information to the intelligence services which lead to the deaths of people working on Iranian weapons programs. He’s given a new identity back in England. However the Iranians find out where he is an send an assassin to take revenge.

It was later adapted as a TV drama with Ross Kemp.

On a personal note this was one of the few Gerald Seymour novels I didn’t have a hardback copy of as I had bought the book as a trade paperback. Recently I got a hardback copy (via a popular internet auction site). Only then I realised I was buying my copy exactly twenty years late.

Hopefully I’ll be able to get around to revisiting the book with my nice “new” hardback sometime this year.

My review can be found on the Battle Sight Zero page.