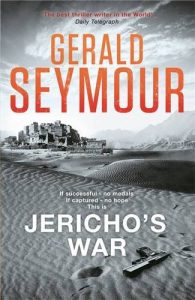 Jericho’s War opens with a prologue where we first encounter Corrie Rankin, an SIS agent who has been infiltrated into Syria under the cover of an aid worker. Things have not gone to plan and Corrie and some actual western aid workers have been captured and held captive by an armed group upon arrival in the country. His future looks bleak until he encounters a radicalised British man who is part of the group. The young man, Tobias Darke, is now disillusioned with the fighting in Syria. Corrie manages to recruit Tobias to help him escape and awards him the code name Belcher. Back in Britain Corrie becomes a minor legend by those in the know for his escape from Syria while badly injured.

Two years later Belcher, who is now with a group fighting in Yemen, makes contact which his SIS handler in the area, Jericho. Belcher informs him that an important meeting is to take place in a village regarding an Al-Qaeda in the Arabian Peninsula plot to bring down a western airliner. Crucially two important figures known only as the Emir and the Ghost will be attending.

Back at SIS headquarters in London Corrie is asked to go to Yemen with a pair of former army personnel to identify the Emir and Ghost and to eliminate them if possible. The decision is made to do the operation without telling the Americans or relying on their Predator drones in the area. Corrie is only too keen to go to try and recapture the sense of achievement and importance he had after the Syria escape.

Belcher has a contact in the area, a female British archaeologist called Henrietta “Henry” Wilson who is excavating a site dating from the period of the Queen of Sheba. She also is one of Jericho’s recruits and through her any details Belcher uncovers are to be relayed to Corrie.

In the militant’s camp Belcher has to try to gather any information he can about the Emir’s arrival without casting any suspicion on himself. Even the slightest doubt could get him crucified by the black clad “security” men and then stoned. There is already suspicion and paranoia in the camp after some fighters are killed by an opportunistic American drone strike.

Corrie and his team arrive on high ground overlooking the village and the militant’s camp where they watch and wait for news. Meanwhile a US Predator drone circles overhead seeing everything, including the unexpected presence of Corrie’s team.

It is worth noting that many of Seymour’s recent books have dealt with people waiting and watching for an enemy figure to appear or to glean important intelligence. It’s certainly been a major part of the plots of A Deniable Death, The Outsiders and No Mortal Thing.

In typical fashion Seymour ratchets up the tension as the reader flits between the viewpoint of Corrie, Belcher, the Emir and the Ghost, plus the US personnel operating a Predator drone.

For me the highlight of the book is the aftermath of the Emir’s arrival at the village when Corrie and his team plus Belcher and Henry are on the run from the inevitable pursuers with Jericho’s promised helicopter extraction delayed. It’s an extended escape sequence and is typically thrilling.

It is published in hardback by Hodder books on 5 January 2017.