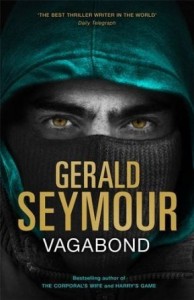 Vagabond marks the fourth time that Gerald Seymour has written about the Northern Ireland troubles. It follows Harry’s Game (1975), Field of Blood (1985) and The Journeymen Tailor (1992). The difference is that the previous three books were all written during the years of the constant terrorist violence where a political solution seemed far away, if not impossible. This new book is set in the present day, some twenty years after the first ceasefires took place.

Danny Curnow is the Vagabond of the title. He handled agents and informers under that code name back in the years of the troubles. He was good at his job but it eventually took its toll on him. The book at various points informs the reader of the fate of some of Curnow’s agents who all were eventually discovered by the IRA and executed. Nowadays he is content to drive coach parties of tourists to World War I battle sites in northern France including the D-Day beaches.

In Northern Ireland MI5 are keeping a close eye on the dissident republican terrorists who are few in number but are eager to restart the troubles. One of them is Malachy Riordan whose father was an IRA man killed in a security forces ambush decades before. The dissidents have a contact, Ralph Exton, who supplies them with smuggled cigarettes to raise money. He offers to broker a deal with a Russian contact to get them guns. His contact is Timofey Simonov, a Russian officer based in Czechoslovakia during the Cold War but who since made the move into organised crime. But neither Riordan or Simonov know that Exton is actually informing on them to MI5

Malachi and a “clean skin” middle class republican symphasier head to Prague to meet Simonov and Exton. Danny’s old box Matthew Bentinick calls him back to duty for this job to work with MI5 agent Gaby Davis to keep the informer Exton doing what they want him to do.

The majority of the book actually takes place in Prague with comparitevly few scenes set in Northern Ireland itself. The theme of the book Is certainly how hard it is to escape the past and this applies to many of the characters. Bentinick is haunted by what happened his daughter in Africa years before. Riordan is certainly haunted by his father and thinks stopping the armed struggle would be a betrayal.

And while Curnow is troubled by the fate of his former agents he is also obsessed by the battlefields he takes tourists to. He wonders about the bravery of the young soldiers in France. During the course of the book he also learns of the fate of the resistance operatives who killed SS officer Reinhard Heydrich in Prague in 1942.

The book is linked to some earlier Seymour works through the inclusion of Henry Carter in a guest role near the end, plus the wives of Jon Jo Donnelly and Mossie Nugent from The Journeyman Tailor appear to link vagabond to the previous “trilogy” of books.

Vagabond is certainly a slow burner and if anything is more of a character driven piece. I would not be surprised if Danny Curnow joins the list of the most memorable Seymour characters.

Vagabond is published by Hodder on 17 July 2014. Thanks to Hodder for my review copy.