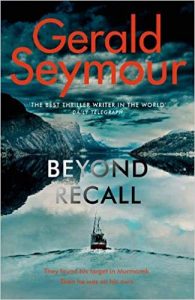 Beyond Recall is the thirty sixth novel by Gerald Seymour.

The book focuses on two characters whose lives were altered by events in Syria, specifically an atrocity that saw the inhabitants of a village murdered.

Present in Syria was an officer in the Russian FSB, on attachment with a group of Iranian fighters.

The other man is Gaz, a British soldier on covert reconnaissance who witnessed the atrocity and the involvement of the Russian officer. What he saw led to him leaving the army and retreating to the Orkney islands where he attempts to find peace.

There was one survivor from the village, a young woman now living in Germany. She comes forward with information that allows the British to place the Russian officer in the northern port city of Murmansk.

An MI6 agent handler known as Knacker decides to launch an operation -codename Matchless – to identify and assassinate the Russian. To do this he recruits the reluctant Gaz and sends him across the Norwegian frontier and into Russia.

Gaz’s only help in Murmansk are two young Russians drug dealers who are linked to a family of sleeper agents.

As always with a Seymour book there is a good sense of location evoked. His depiction of Murmansk feels authentic with the shadow of the Kursk disaster lingering.

Intertwined with the present day events the book gradually reveals what happened at the Syrian village a few years before, a device Seymour has used in previous novels, most recently Battle Sight Zero where the reader learns of the history of the specific AK-47 rifle.