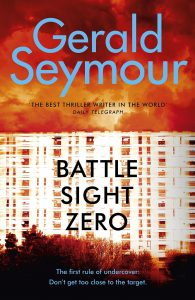 The official Gerald Seymour Facebook account has revealed the cover to the next novel Battle Sight Zero. The book is due to be published in he uk next January.

Gerald Seymour will be appearing at the Edinburgh International Book Festival to discuss his latest novel, A Damned Serious Business.

The event From Russia with Hackers is on Wednesday August 15, 5.30pm at the Spark Theatre on George Street.

Tickets can be bought from the following site.

A placeholder cover image for the next Gerald Seymour novel, Battle Sight Zero, has appeared on amazon.co.uk. 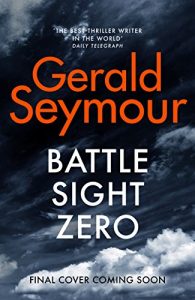 The final cover image will no doubt appear sometime between now and January 2019. 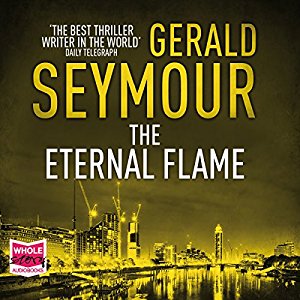 Sue has reminded me that Gerald Seymour is being interviewed at Rhydypennau library in Cardiff next Wednesday night, 31st January 2018. The event is free entry and he’ll also be selling and signing A Damned Serious Business. 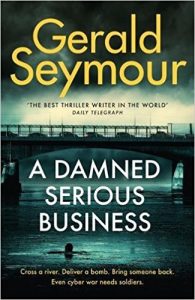 A Damned Serious Business, the new novel by Gerald Seymour, is published in the UK today in hardback.

Bargain hunters may want to check out Amazon UK where the hardback is currently priced at just £5.99. The price will probably go up so grab it quickly.

Just a quick alert that the new paperback edition of Jericho’s War is officially published by Hodder books on Thursday 30 November 2017.

That will be followed in January by the new hardback, A Damned Serious Business. I’ve finished reading my advance copy and a review will be up soon(ish).

Finally thanks to Sue for letting me know that Gerald will be talking about, signing and selling his latest book in a little Welsh library on 31 January. Details on Friends of Rhydypennau Library Events Facebook page.

A new cover image for A Damned Serious Business has appeared on Amazon UK. This one features a new font for the author’s name so I guess a cover refresh is happening.

Publication is still set for 4 January 2018. 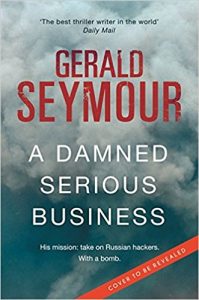 I’ve just noticed that a placeholder image for the next Gerald Seymour novel A Damned Serious Business has appeared on Amazon UK. The book isn’t out until January so I would imagine the final cover reveal may still be a good way off.