A cover image for The Foot Soldiers, the next novel by Gerard Seymour, has appeared online. 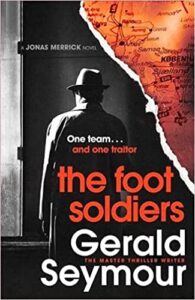 The publication date is currently 31 March 2022, pretty much exactly six months away.

I have found a blurb for a new novel called the Foot Soldiers, due for publication on 31 March 2022.

Defectors are not always welcome. Is the information they bring worth the cost of protecting them for the rest of their lives? Is it even genuine? Might they be double agents?

These are some of the questions facing MI6 when a Russian agent hands himself in to them in Denmark.

As a team begins to assess his value, his former employers in the Kremlin develop a brutal plan to show that no defector will ever be safe.

And they know where to find him. Which means there must be a mole in MI6.

So it is that the cavaliers of Six find themselves being interrogated by nondescript Jonas Merrick of Five – the man called back from retirement and his beloved caravan, the man the young guns call the Eternal Flame because ‘he never goes out.’

But while he may be grey, Jonas is also ruthless. As he quietly works through the suspects in London, and violent mayhem breaks out in Denmark, Jonas plans not just to unmask a traitor, but to hit back at the Russians with deadly force.

First encountered in The Crocodile Hunter, Jonas Merrick is set to become one of the great figures of modern spy fiction.

We are (hopefully) heading toward publication of The Crocodile Hunter in two weeks so I have gone ahead and added my review of the book to its own dedicated page.

Many thanks to the kind folk at Hodder books for sending me an advance reading copy.

The Crocodile Hunter is currently scheduled for release on 15 April 2021. 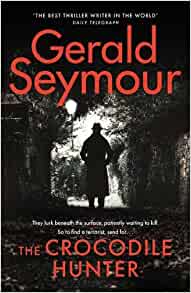 Just a quick note that the new Gerald Seymour novel, Beyond Recall, is published today in the UK by Hodder books.

I’ve not got my copy yet so a review will follow after I’ve had a chance to read it.